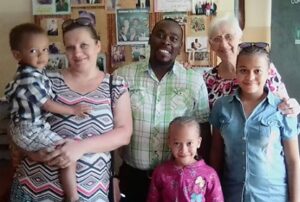 Moses’s story is one of determination, courage, and faith in the face of unbelievable challenge.

Abandoned on the road as a baby, he was discovered and taken to a hospital where a local woman agreed to take him in. He lived with her for the first six years of his life before being sent to become a houseboy for a soldier. That life was full of instability, with frequent moves and ramshackle housing. Though he was responsible for gathering firewood, cooking meals, finding water, and hand-washing laundry, he still managed to attend primary schools. But, when his employer was convicted of a crime, Moses had no choice but to move into the jail, too.

When his caretaker from infancy heard of his situation, she took him in and re-enrolled him in school. Despite all he had been through, he tested well and continued his studies. But, getting to school required a 30-mile round-trip journey. And he was only able to cover his tuition in exchange for arriving early each day to clean the school, which became increasingly difficult.

With the help of a YES Scholarship and Carol Adams, Moses was able to cover his tuition and rent a small room close to the school. Eventually, Moses came to live with Carol, who calls him “God’s gift to me.” As she describes, “He ended up living with me all through the school years and taught me so much. I was brand new to the country and so naïve. I was often very sick with Malaria and in need of care. Moses learned how to put IV drips on me when he was still a school kid.”

Perhaps because of that caretaking role, he began dreaming of becoming a doctor. After graduation, he was accepted to medical school in Ukraine, where he graduated at the top of his class, even delivering his commencement speech in Russian. Though he had a job offer in the United States, Moses was committed to returning to Uganda to give back. Now married with three beautiful children, Moses serves as the head of surgery at a major hospital in Kampala and continues to look after his childhood caretaker and Carol, who says, “He is like a son to me and his family are like my family.”