“Talent is universal, opportunity is not,” Christopher Ategeka shared in a TED talk he delivered in 2017. 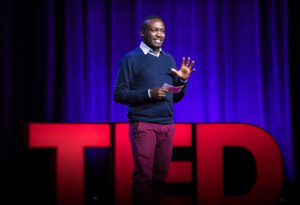 An orphan at an early age, Chris spent the first many years of his life in extreme poverty. Left in the care of his paternal grandmother, he assumed the role of “head of household” at the age of seven, looking out for various relatives and his four step-siblings. Food was scarce and the fight for survival was a daily struggle. In a life-defining moment, Chris and his siblings tried to carry their sick brother several miles to the nearest healthcare facility. He died in their arms before they could reach a doctor or nurse who could have saved his life.

YES found out about Chris, and through a scholarship, was able to help him with school. He studied diligently and upon graduation, his US-based sponsors sent for him so he could live with them and attend college in California.

Eventually graduating with his Bachelor’s and Master’s of Science in Mechanical Engineering, Chris was commencement speaker for the graduating class of engineers in 2011 at UC Berkeley. Since that time, he has dedicated his professional career to being an “opportunity/talent catalyst” to give others the same gift that he was given. Talented young people everywhere, he believes, deserve the opportunity to focus on solving the world’s biggest problems – and the world needs their ideas.

Now based in San Francisco, he operates a business incubator to support and fund early stage startups. Additionally, he founded Hourglass Ventures, a fund that supports visionary entrepreneurs from the African continent who come from underprivileged backgrounds; as well as Health Access Corps, a social enterprise that works to establish sustainable health care systems on the African continent.

Chris has won many international awards for his work, including TEDFellow, Forbes Magazine 30Under30, Ashoka fellow, Echoing Green fellow and most recently he has been honored by the World Economic Forum as a Young Global Leader (YGL).